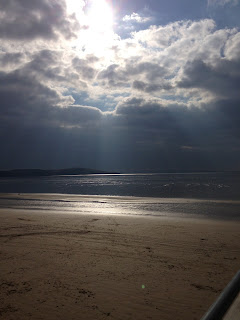 It is still freezing, cold here in the U.K.with biting winds but we decided to still go down to Brean, Somerset, for the long Easter weekend, and stay in a caravan. It sounds like we are raving mad but it's a break, Mick doesn't take much time off from work, so we have to make the most of Bank holidays.

On Good Friday we made a detour to Cardiff, as I knew Paige would love the shopping there, she will be 18 in July and my Mom & Dad said they would buy her a Vivienne Westwood necklace. There's a Vivienne Westwood store in Cardiff so after a quick Starbuck's coffee, we headed to there. 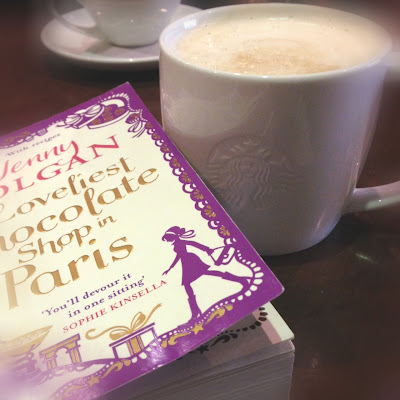 After trying on a few different necklaces she decided on the one she liked the most, it's a beauty but it's all wrapped and sealed in the bag so she's not tempted to keep peeking. She also saw some matching earrings so my sister and brother said she could get them too from them. 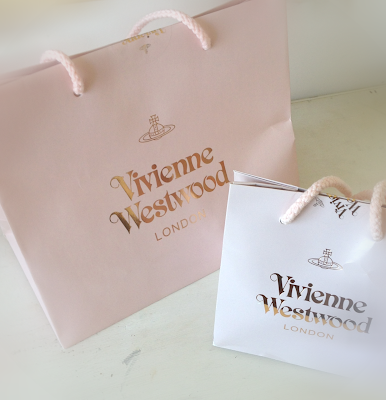 Mick treated me to a few things from the Cath Kidston shop. 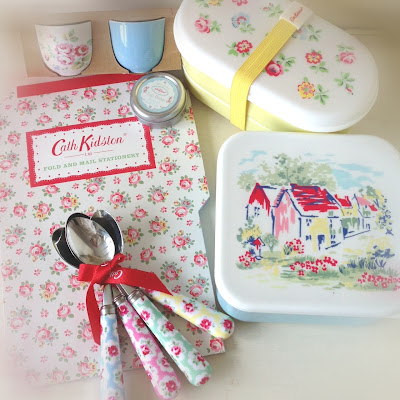 We then headed to Brean, boy, the caravan was cold when we got there but with all the heaters on and the fire, it soon warmed up, I brought lots of my crochet blankets from home for the bed so it wasn't too bad at all.

Once unpacked, we wrapped up and headed out for some dinner. 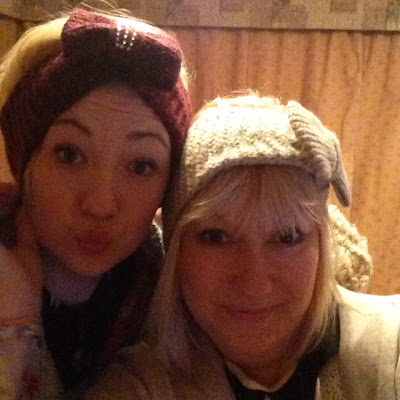 There are a couple of reasons we go to Brean, 1, it is the closest seaside to us so Mick doesn't have to drive for hours and 2, we always have lots of fun !!!!

After dinner we went to the Karaoke bar, where we were teasing Dan about putting his name down for a song, he very nearly did as while I was pretending to give the man the slip, he actually took it from me so I then had to ask for it back as Dan's face was pure terror. 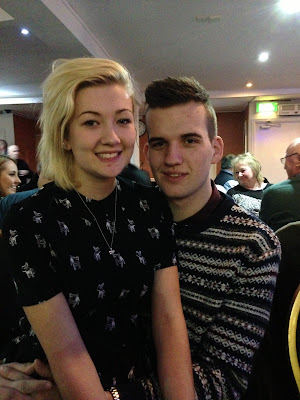 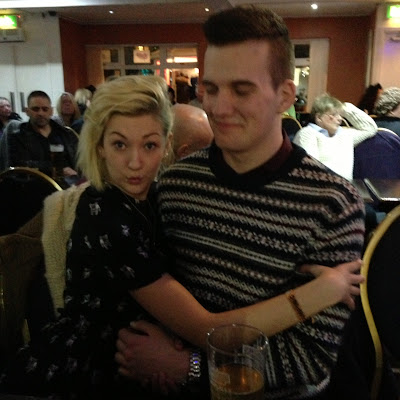 I had to share this photo, when Dan thought nobody was looking he started flexing his muscles, I love Paige's expression on this photo.

We had a lazy Saturday morning at the caravan, I did some crochet, Paige read her book and the men watched T.V. 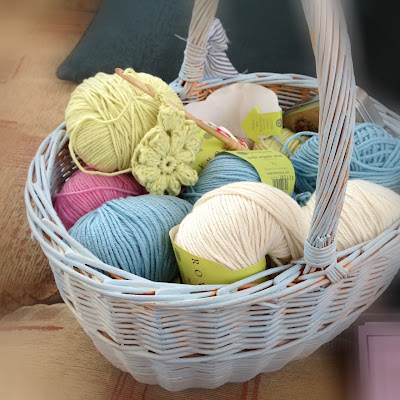 We then headed to Weston Super Mare, the weather was kind to us and though it was cold the sun shone, maybe Spring is on it's way. 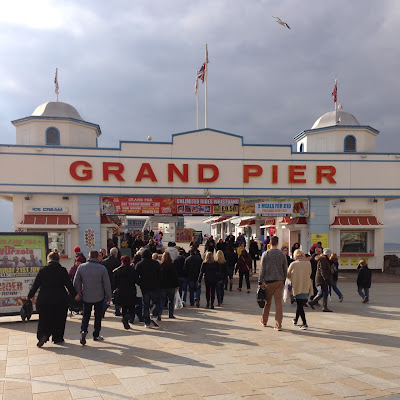 As we were walking along the Pier, we looked down and saw this in the sand, how romantic, I hope she said "yes". 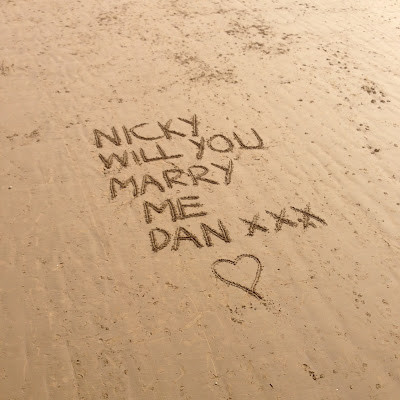 Easter Sunday was another beautiful, sunny day and was even a touch warmer. Today was the day I got to open my Dawn's Easter Swap that was organised by the lovely Rising Dawn on Instagram. 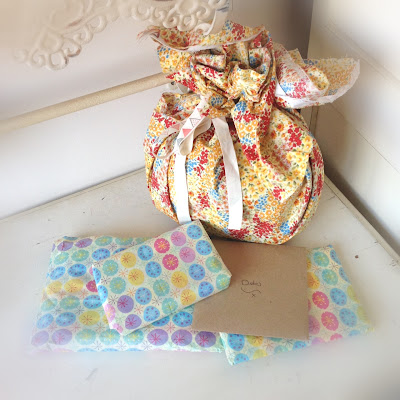 My swap partner was Erin, who's IG name is Coffee Kisses, I love how she wrapped the one gift in fabric. She had seen I'd been buying sewing books so thought I would like the fabric, such a thoughtful lady. 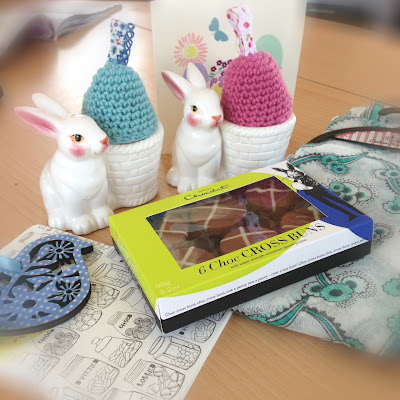 Wow, I was overwhelmed with these beautiful gifts, I adore the bunny eggcups, I also received a Paperchase hanging bird, Hotel Chocolat chocolate, a funky notebook and a beautiful Celia Bertwill pattern scarf not forgetting the handmade crochet egg cosies.

Later, we had a look around the market, played in the amusement arcades, then went for a drink, it was so nice to be able to sit outside in the sunshine. 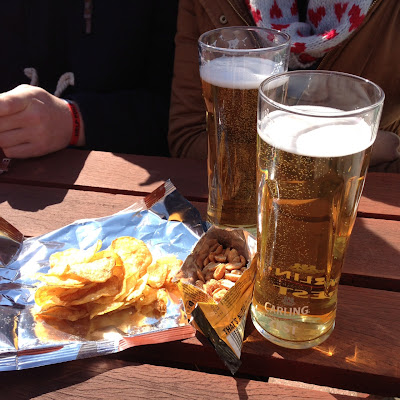 So, even though the weather wasn't as warm as it was, this time last year, we all had a really lovely time.

Enjoy the rest of the week.
xxxxDebxxxx
Posted by Deb Hickman at April 04, 2013

Looks like you had a wonderful time. I had fun seeing your photos..

That's a wonderful post Deb, what a great way to spend quality time with your loved ones. It's nice to get out and spoil someone/be spoilt from time to time! Ira x
irascreacorner.blogspot.nl

What a beautiful holiday. Your daughter is so cute. She looks like a UK rockstar! I love your headbands. Did you make them? I have to try a hot cross bun. I never had one before.

Looks like you had a wonderful and great time Deb!!!... Loving the lovely photos!!! hugs...x

Sounds like a great break ... Love the gifts from your friend ... so cute those egg cups! and your lovely basket with the wool looks so pretty!

Looks like you had a lovely time away. The photo made me smile as WSM is where my husband proposed to me! Gorgeous swap items. Best wishes, Pj x