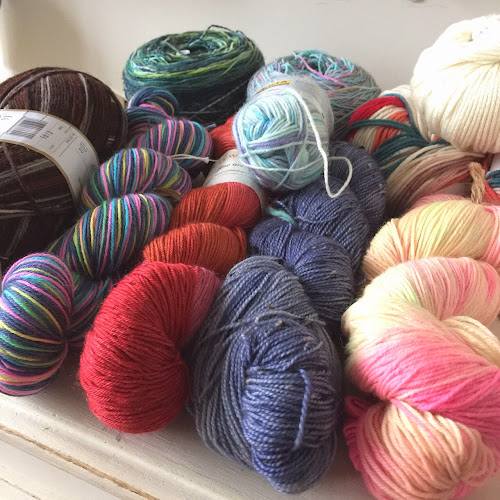 I'm back today to tell you about the Personal Mystery Sock Club 2015, a great way to start using up some of your stash. I saw this idea over on Instagram, where Aunty's Alice Loves To Knit, decided she was going to use up some of her stash to knit socks.

If you have lots of sock yarn that you want to use up, feel free to join in, if you're on Instagram the hashtag is #personalmysterysockclub2015 where you'll be able to see everyone's progress over the coming months. I'm a big fan of IG, there are so many gorgeous photos to look at and lots of inspiration for different crafts. If you want to find me, I'm Tinkhickman on there, if you're part of the IG community, let me know. 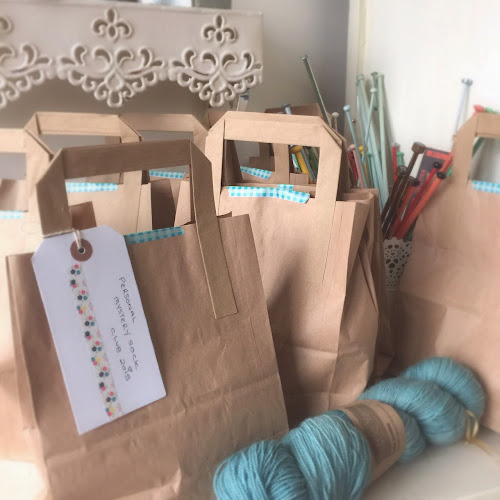 Alice picked twelve skeins of sock yarn from her stash and sealed them into brown paper bags so each month she picked a bag without knowing which skein was in there. When people saw this on IG, lots of us wanted to join in and so it grew with many of us taking part.

It's all very informal and you don't have to chose 12 skeins, some people have picked six, not all are going to knit socks, there were some suggestions of mittens and shawls. I decided on putting together nine "mystery" bags using the yarn in the top photo.

There were certain socks I wanted to knit this year so my decision on the yarn was based on that. I wanted a pair of DK weight, my husband wanted another pair, I saw a pattern for some "Fair Isle" style socks and I wanted to knit a pair of baby socks. I then sealed the bags and set them aside, all ready to cast on once I'd finished some WIPs. 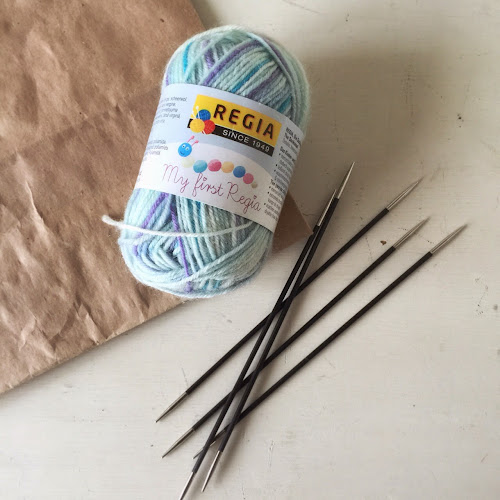 I finished my WIPs at the end of last week, so the first bag I picked at random contained the yarn for baby socks, My First Regia. This itty bitty ball of wool is just 25g and is especially sold to knit small baby items, I bought it to knit my grandson a pair of socks. 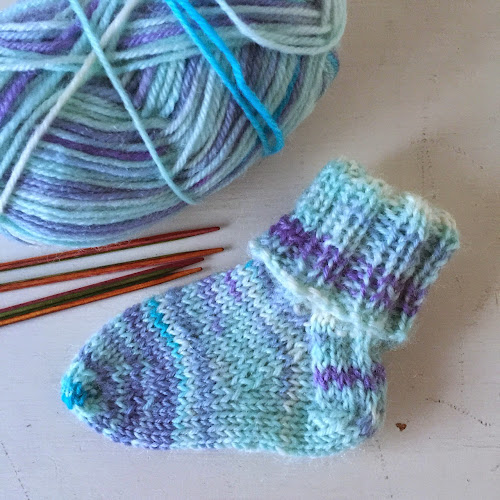 It took me a while to chose a pattern as I wanted a mini version of the socks that I knit for myself. I wanted one with a heel flap, a lot were using DK and I wanted a 4ply pattern and some looked a very odd shape sock. Eventually, I decided on the Stretch Baby Socks by Patons which is a free pattern with sizes ranging from 3 months to 2 years. 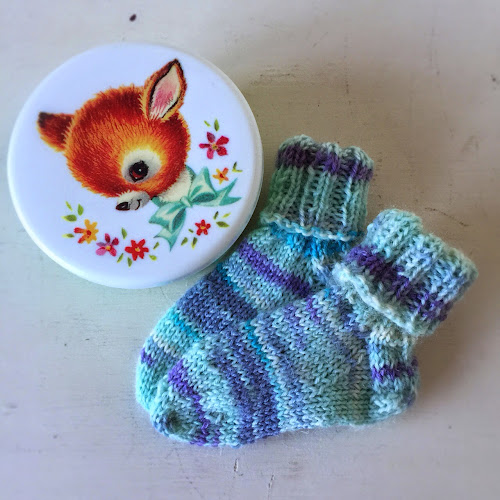 They were super quick to knit, I cast them on late Thursday afternoon and they were finished by the end of the evening. I knit the smallest size and was eager for my daughter to arrive on Friday so I could try them on him. After having a little cuddle, I showed him his new socks which he immediately grabbed for and put in his mouth!!!!! I then went to put them on his feet and they wouldn't go over his little chubby ankles!!!!!!

I wasn't too upset as I've got enough wool left to knit him a bigger size and this tiny pair will go to my friend's grandson who is due in April. It's just another excuse to knit another pair of sweet little baby socks.

Thank you for stopping by and let me know if you're going to take part in The Personal Mystery Sock Club.

Have a great week.

As I have said before, I love to see the socks that you knit, so I will really enjoy watching what you make through the year. It is a shame that these socks weren't suitable for your grandson, but how great that it means that you get to make another pair! They are so cute!! I hope you enjoy your challenge. xx

Those are just adorable!!!!

They are such cute socks. For one of your little treasures? Jo x

This is a popular meme. It's a great motivator to use up sock yarn. I have two, small drawers full. The baby socks are cute. I can imagine soft, baby chubb kankgles filling them up. Sorry they didn't fit.
And I like how we have to prove we're not a robot. Sometimes, Blogspot's wacky words are hard to figure out and it's annoying when I have to try a few times.

The socks are so cute -- and, apparently, delicious.

I love the mystery sock club, but it requires more knitting commitment than I am able to summon up. I wish I were more disciplined!

What a fun idea! Looking forward to seeing what is revealed in your bags.

I am not going to be able to hit monthly milestones, but I'm doing this sort of willy nilly.

I don't know what I'm oooing over more, the lovely colorway or the size and cuteness over those baby socks. too much!