This week's hostess at The Shabby Tea Room is Audrey and she has choosen embossing for this week's challenge.You could either use heat or dry embossing,I choose to use dry embossing as on Monday I bought one of the new Cuttlebug cut and emboss folder and was itching to use it.
In my previous post I mentioned the photo card that I was struggling with,well I have eventually finished it,thanks for the advice that was given.I think I found it harder to do than other cards because I wanted it to be extra special because it's going overseas to my daughter's friends boyfriend who's serving in the Forces.Faye asked me to put the photo on the card as it was taken the last time he was on leave.I had some great advice off Lisa who gave me plenty of ideas on what to put on a masculine card.I did try stars first which looked great but decided on the hearts as it was a sweetheart card.
I used some blue patterned paper for the background of the card I inked and machine sewed around it (the sewing isn't very clear on the photo).I used the Cuttlebug Brocade Window cut and emboss,it's great to use,when you've embossed there's a flap of plastic you can lift up so you can ink the raised embossed part while still in the folder,genius! I inked mine with Tin Holtz Distress Inks in Tumbled Glass and Vintage Photo,I think the two colours work so well together.I put a piece of PP behind the frame and added the photo.The metal frame and Adore ticket are both from Tim Holtz,it's quite a simple card but thought that's all it really needed as I wanted the photo to be the main focal point. 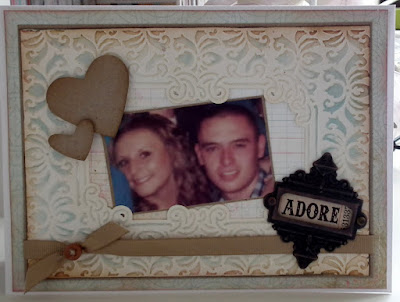 I hope they both like what I've done and even though I struggled I really enjoyed making it because it is such a special card with a special meaning.My thoughts are with everyone in the Forces who are doing such great job and their families because I know how much Faye worries and misses her special man.

Very pretty, Deb! Thanks for sharing your lovely design with us this week in the Tea Room :)

So pretty! Great use of embossing! Thanks for playing along with us at TSTR! :)

This is GORGEOUS! I'm sure they'll both love it!!!

That is such a lovely card - I am sure they will both be delighted with it. It's gorgeous.

This card is wonderful and I'm sure you're daughter's boyfriend will love it! It has to be a wonderful treat to get something so meaningful in the mail! Thanks for playing and sharing with us in the Tea Room!

HOLY MOLY, the card is beautiful!!! (uh, how do you spell moly?)

Wowzers! This is beautiful! He is going to LOVE this. Thanks so much for sharing this fabulous creation with us in the Tea Room.

OMG I just bought this folder and it's still in the package! Not for long, this is amazing. I know he will be so thrilled with the card.