Hello my friends, I'm lying in bed writing this post after a very, long and traumatic week. I've had a very blessed life from childhood to now but sometimes something happens to burst your bubble and my bubble burst early Monday morning when I had a phone call from my Mom saying that my brother was in ICU and was very poorly.
On Sunday night he was found unconcious on the pavement, luckily a police car came past and found him when they did. He had been attacked and left for dead, it was touch and go for him and when we arrived at the hospital he was still on a ventilator. We waited in the relatives room for many hours before we could see him and was broken hearted when I did, he was unrecognizable. How could another person do this to someone ?
Whilst I was getting a drink I saw a friend who asked if everything was ok and when I told her what had happened she gave me a little wooden cross that had been blessed and even though she was obviously very poorly herself all she was worried about was me and my family, such a lovely lady.
They took him off the ventilator on Monday afternoon and he was talking to us by the evening, though he doesn't remember anything about the attack, he'd been left with a fractured eyesocket, broken jaw in three places and broken nose as well as injuries to his body.
Since then he has made an amazingly quick recovery, the swelling in his face has gone down and you can see it's my brother again, he will make a full recovery. He's got to see a plastic surgeon on Monday and my Aunty joked they may make him better looking than before, which he found funny. I'd like to think that somebody was watching over him from above, he still has some way to go but the worse is over and now I just hope that they catch and charge the person who did this to him so nobody else has to go through it. We just can't understand why anybody would have done this to him, he isn't violent man just a nice guy who's whole life is centred around his kids. I've had so many people ringing and messaging me, telling me how sorry they are and wishing him well which has been very heart-warming, I've passed them on to my brother who has really appreciated it and hopefully cheered him up a little bit.
Needless to say I'm not in the right frame of mind to craft or blog but will hopefully back soon, I did make my brother a very quick card inbetween hospital visits and some Whoopie Pies, as he has a bit of a sweet tooth, he's going to be the size of an house with all the sweets and chocolates, people have bought him. 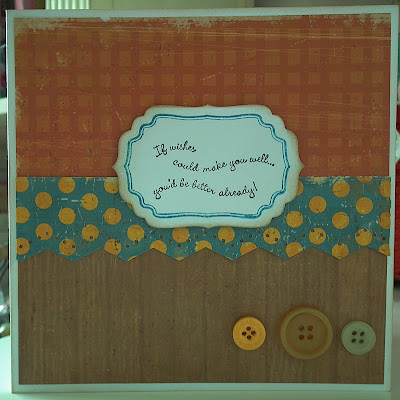 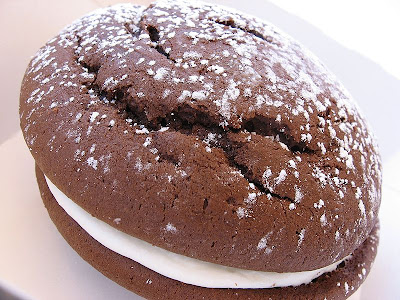 My friends who read my blog regularly know this is my online diary too and was something I needed to talk about, thank you all for listening.

Email ThisBlogThis!Share to TwitterShare to FacebookShare to Pinterest
Labels: family

Oh Deb how awful for you all! It is unbelievable that one human being could do this to another...especially to someone who sounds like such a peaceful family man. I was so glad to read that your brother is recovering well...as you say, someone must be watching over him. Silver linings always show through though, and the strength and love of your family for each other is a real blessing..love & hugs to you all.. :)x

i'm so sorry, deb, but am glad he's over the really bad part and he's on the mend. you being there for him is the best medicine:) oh, love his guy card, too!

Oh Deb, Thank God the police found him when they did and that everything will eventually be ok.I will be thinking of you and your family often and sending prayers your brothers way. xoxo

I am so sorry to hear this news. My prayers go out to you and your Brother and your family!!!

Oh my gosh Deb, how horrible! What a relief to hear he's okay but that must have been terrifying! I will keep him and his family in my prayers and hope that the person who did this will be caught soon!

What awful news. You are so right there are some bloody thugs in this world. I sincerely hope that they are caught soon and dealt with.

Sending you and yours a prayer for a speedy recovery.

What a truly awful thing to happen to your brother. Thinking of you all and wishing him a speedy recovery.

Deb, I read your post in shock and horror. What an awful thing for your brother and your whole family! I'm so thankful that he is now surrounded by loving and caring people. I hope whoever did this terrible thing is brought to justice. You take care, too. You and your whole family is in my thoughts and prayers.

Oh my God Deb... I am sooooooooooo sorry about your Brother... I had noooooooo idea!!! It's so hard to swallow why there is evil people like that in the world... *sigh* ... I will keep him in my prayers...

OMG! What a shocker! And WTF? Bad karma on those who attacked your brother. Are the police investigating it and all?
But I'm so glad he will have a full recovery and hopefully one day he'll remember to help the police any way he can. How traumatic for your ohana and his kids. I'm so sorry you all had to go through that. HUGS.
Lovely card.

Thinking of you Deb. Hope he is on the road to recovery. So sad what happened. My thoughts and prayers are with you. J xx

Im so sorry to hear about your brother,there is so many evil people in this world that cannot leave good people alone,but something awful will happen to them one day.I am pleased that he is on the way to recovery.Love to you and your family.Jill xx

Oh, dear Deb, I certainly will be praying for your brother and for a complete recovery. It's hard to understand the wickedness of sin in this world... thankfully your brother wasn't hurt any worse by this person. Let's hope they do all they can to find him.
I'm sure the Whoopie Pies made him feel some better... they look marvelous!!!
Hugs!!!

OMGosh Deb! I am horrified that this happened to your brother! It's probably for the best that he doesn't remember such a brutal act. I hope that memory doesn't come back unless he can remember the brute who did this to him. Thank goodness he has a sister that made him a CUTE card and whoopie pies! I'm sure that was the best medicine!

Dear dear Deb... I'm reading your post with tears in my eyes, why do people treat each other this way... Such awful news... This must really have had such a huge impact on you and your family. And your poor mum, it must have been so difficult for her to tell you what happened. I am truly glad that your brother wasn't entirely without his guardian angel and I hope that he will fully recover, although he will maybe suffer from this traumatic experience in months/years to come... Thank God he has such a warm, loving and caring family. Blessings to all of you Deb, Ira xxx

Awww... so sorry to hear about the tragic accident, who on earth would harm another human being like that. I am glad that he is on the recovery and my heart goes to you and your family, it must a tough time for all. Big hug!!!!

So sorry to hear that Deb.
I can't understand how someone can do that.
I'm so glad your brother will make a full recovery.
I'm so sorry I only found out now. I haven't been home since coming back from tour. Otherwise my prayers would have been added to the many others that I'm sure would have gone up for him.
Take care of yourself.
Sonia xx

That is really awful. I do hope he's feeling better. Chin up chuck.

Deb, I am sending prayers to you and and your family. What a shocking and scary time. Glad to hear he is recovering well. *hugs*

working my way back through past blog posts and this one is so shocking. I'm so sorry to hear of this dreadful incident, Deb. I don't know your brother but please know that I'm thinking of you and your family and sending you warm wishes and positive thoughts. From the more recent post I read earlier this evening, I gather that he's on the mend but still has a way to go. Such a meaningless thing to happen. I hope he can heal. Sending love. xx