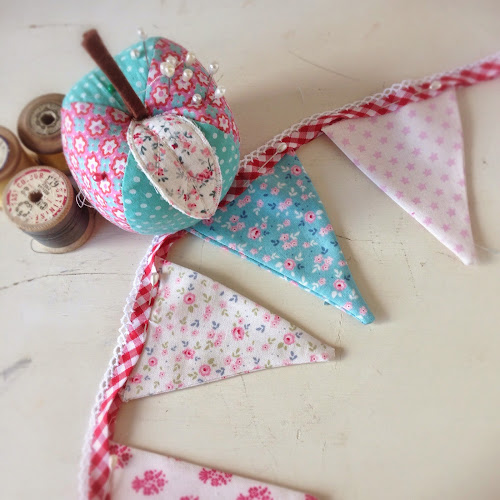 Hello, I hope you've had a lovely weekend, it's been beautiful and sunny here in the UK. I've pottering around and spending time in the garden, knitting and reading. 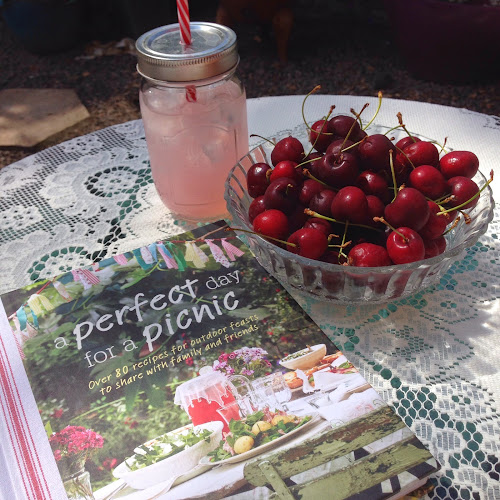 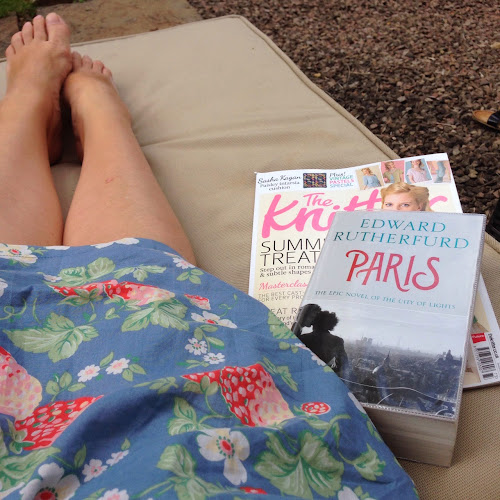 I even had an afternoon nap, yesterday, I can't usually fall asleep in the day but I think lying in the sun, reading and listening to the birds I dropped off.

As I was sat looking around the garden, I noticed my bunting that I made a couple of years ago was a bit worse for wear so I took it down with the intention of making some more when I had a minute. 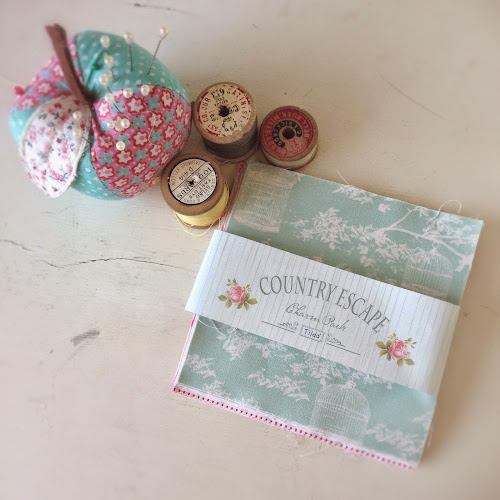 Today I was supposed to be tidying my craft room, which I did sort of start but as I was going through my fabric, I found this Tilda Country Escape charm pack. My first thought was "this would make such pretty bunting"!!!!!! 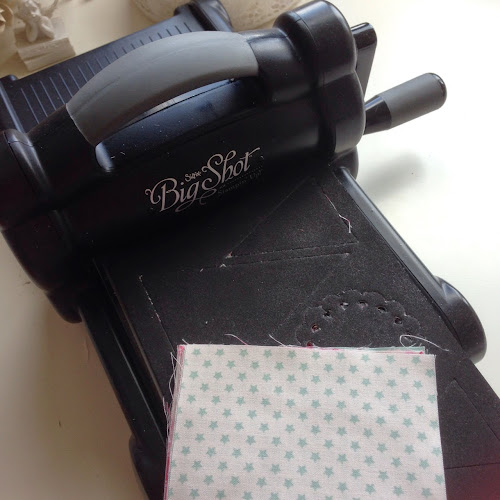 I didn't want to spend lots of time on this project so I found out my Sizzix Big Shot and Stampin'Up Bigz Perfect Pennant die and found that the squares from the charm pack were the perfect size to cut out the bunting triangles, you will also need some seam binding. 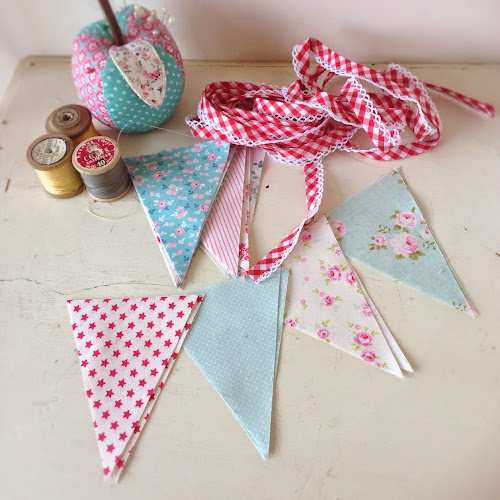 The charm pack has two of each design so I chose thirteen different designs, twenty six squares altogether and whizzed them through the Big Shot. The Big Shot can cut through about eight layers of fabric at a time, it's obviously a lot quicker with a die cut machine but if you haven't got one you can hand cut, just draw a template to the size you want, you can make it as long or short as you want, just cut out the number of triangles accordingly. 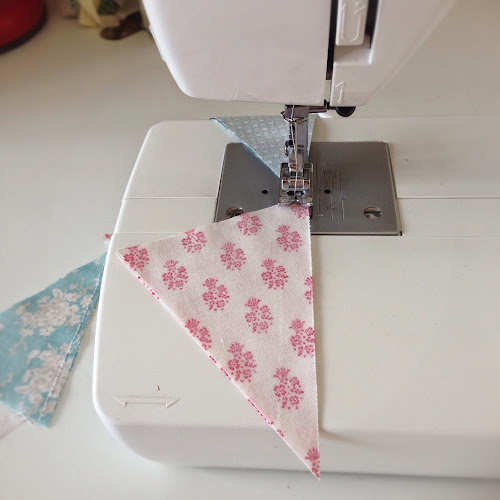 Once cut take your triangles and lay your fabric right sides together so the wrong side is facing out, ready to sew together. I didn't pin them as they are fairly small but if you find it easier just pin before sewing. 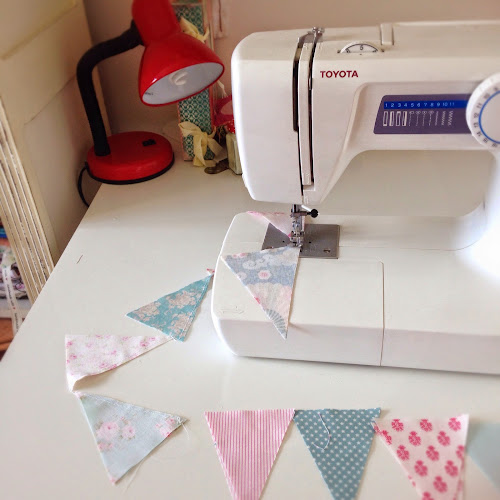 I chain-sewed them down one side with an half a centimetre seam allowance, I used the edge of the presser foot to guide me. Chain sewing is a quick way to sew lots of fabric shapes together down one side without having to keep breaking the thread and starting again. Once you have finished sewing one triangle together, line up the second one without breaking the thread, sew down the side and carry on until all your triangles have been stitched and you have a line of triangles, joined together with the thread. Cut all the joining threads to separate the triangles, you are then ready to do exactly the same with the opposite side. 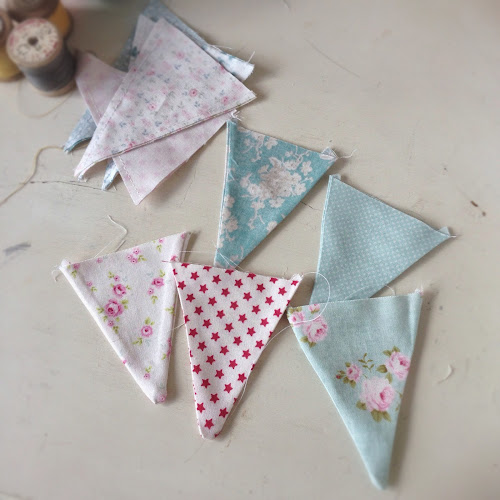 Once both sides are sewn, turn the triangles so the right sides are facing, you will need something pointy to poke the point out. I used a crochet hook, just be careful you don't poke a hole through the end! There is no need to sew the top edge as the seam binding will cover it. 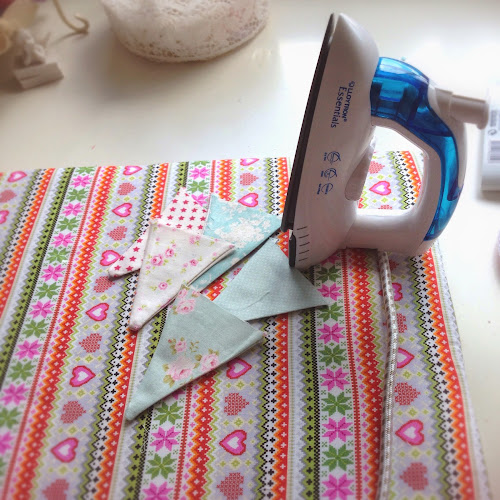 Once you've got all your triangles turned the right way, iron them so you have a crisp edge and the bunting is nice and flat. It is worth the effort of getting the iron out, your bunting will look so much neater. 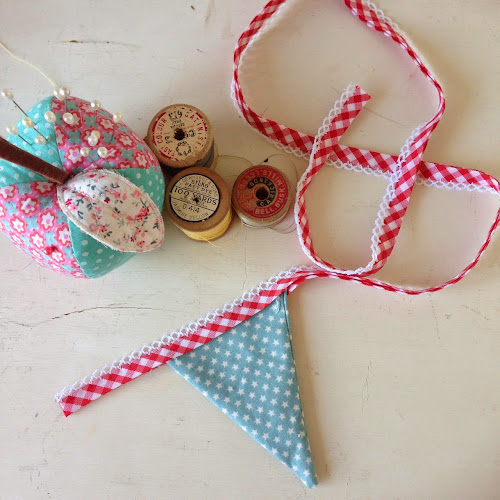 Take your seam binding, folding in half and placing the triangles inside the fold, stitching along the seam binding making sure you have caught the triangle as you go along. Again, I didn't use pins and did it by eye but if you find it easier, pin before stitching. 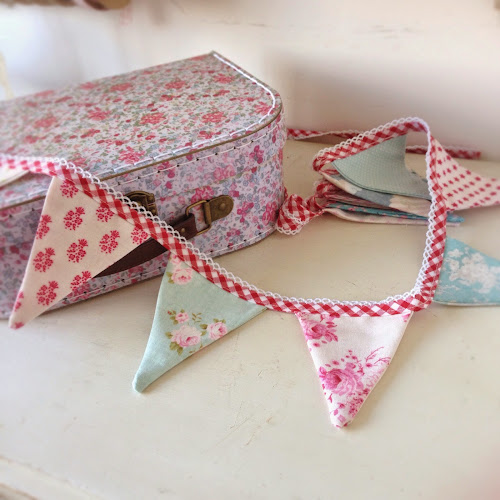 This is a quick way to make bunting and only took me sixty minutes but that was using a die cut machine rather than hand cutting, not pinning and preparing everything in advace like setting up my machine and putting the iron on ready. Obviously it will take you longer if you're hand cutting or you run out of bobbin thread half way through but even then it won't take you more than a couple of hours. The finished triangles measure 10cm down the edges and 7cm across the top so the are mini but again you can make them to whatever size you want.

Another quick way of making bunting without cutting out is to use the squares as the are and make square bunting. This time you'll be putting the two wrong sides together so the right sides are showing as you won't have to turn inside out. Sew around three sides about 1cm from the edge then with pinking shears cut along the three edges to help prevent fraying and finally sew onto the seam binding. Quick and easy!!! 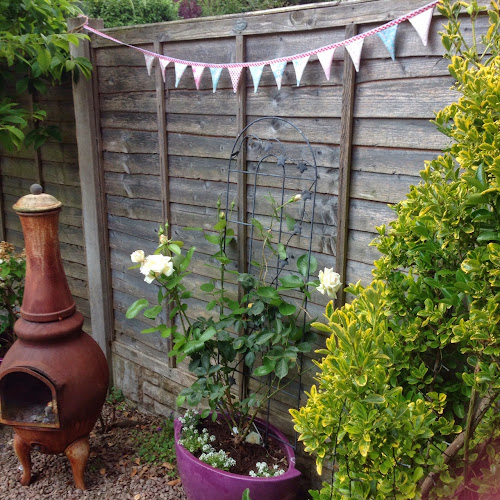 It's now up in the favourite part of my garden, let me know if you make some so I can take a look at it!!!!!! 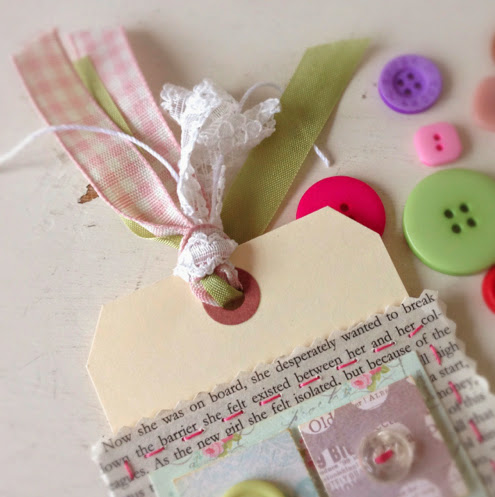 I'm so excited that my first class has gone live today on Camp Aloha Friends, it's called Tag, You're It, Part 1, it's in three parts going from a quick and easy project to the third class that is more in depth and will take you longer to finish, all using tags!!! I can't believe it's been six months since the lovely Mel approached me and asked if I'd be interesting in teaching some online classes.

I didn't hesitate in saying yes, I love Mel's ideas and she is such an amiable person. I'm so glad I did, being part of CAF has been a pleasure, I've made friends with like minded people from around the world. It's not too late to join in the fun, the classes will be online with a page protected password, where you can access them at any time until end of September, so you have plenty time. If you'd like to find out more about it, you can check here and here, there is only one "suitcase" left but you can still just do the classes and use your own materials.

Wasn't our weekend weather wonderful! Love your mini bunting, that Tilda fabric is just perfect for it. I made some bunting today at SMS for the shop window - red, white & blue - and now I'm thinking I need to make some more for our deck at home too.
Have a happy week,
xx

I won a Tilda charm pack like that from a magazine last week, what a great idea. Jo x

I love your bunting. It's modern and sweet. Glad you're having a great summer.

I love your bunting!!! Thank you for the tutorial as well. Hope that you get lots more lovely time in the garden! xx

Your bunting is so summery sweet Deb, and so quickly made. I've been toying with the idea of one of those types of cutting machines but haven't done anything - YET! Still thinking!
I wish you well with your classes -your students are sure to learn much from your expertise. xoJoy