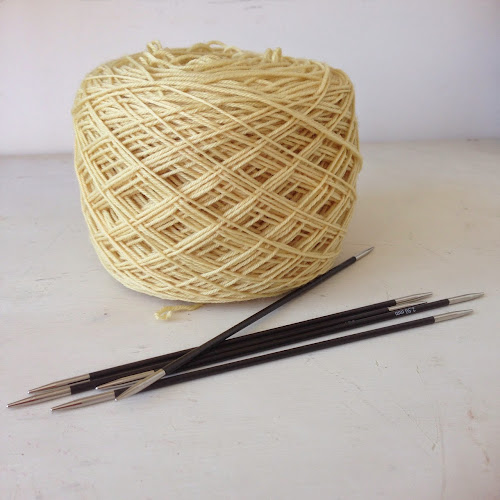 Hello my friends, I hope you're enjoying your week, so far. I've only been knitting on a couple of things this week, so here's what I've been working on. 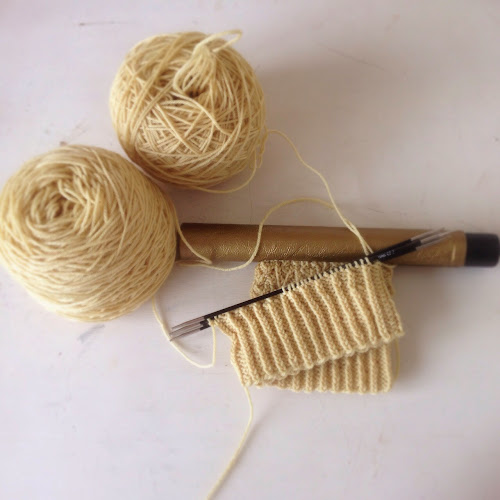 This is all I can show you of my first project, it is a Mystery Knit Along run by Coop Knits and Brighton Unwind so I don't want to show any spoiler photos and ruin it for other people who maybe taking part. The pattern is called Pavilion and I'm knitting them at the same time on two sets of DPNs.

This is my first mystery knit along and for those who aren't sure what it is, the designer releases part of the pattern each week, until the pattern is complete so we start knitting along only knowing basic information. The only thing I knew about this pattern was they were cuff down socks by Rachel Coopey with some cable and twisted stitches in the pattern. This MKAL has three clues over three weeks so I'll hopefully have them finished by the end of the third. If you want to join in the fun you can find the two Ravelry groups here and here

I'm so excited, it looks like I could be going to Unwind which is a knitting and fibre festival been held in Brighton. I've never been to a yarn and fibre event before and I was telling my husband about it and he said if I want to go, book some accommodation and we'll make a weekend of it. It's my birthday week so this will be my birthday treat!!!!

There is so much going on, not just in the main part where there are stalls and workshops are but all over Brighton such as knitting in the Pavillion Gardens, to see everything that's happening, look here. There are a few knit alongs over on the Ravelry board going on, with patterns from some of the designers who will be there. 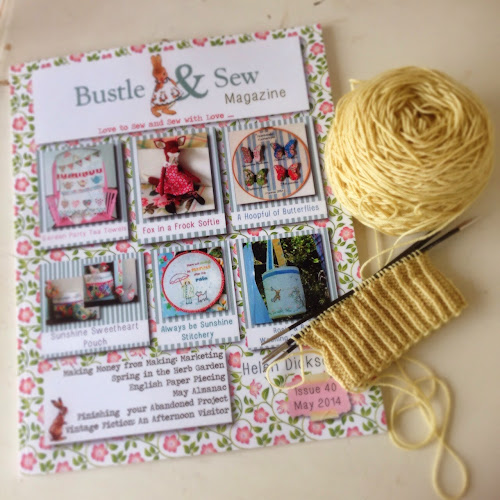 I'm still reading The Perfume Garden which I started last week but I'd thought I'd share this new magazine I bought from Amazon. It's called Bustle and Sew and is full of beautiful sewing projects, very vintage and whimsical. I haven't had a good read of it yet but I'll let you know what I think of it. 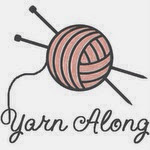 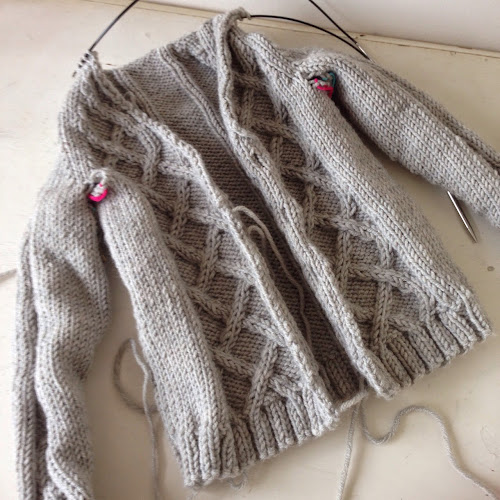 The other thing I've been working on is the Gramps Cardigan by Kate Oates, I'm knitting this for my nephew's first birthday which was on Sunday. I haven't finished in time as I had to wait for some DPNs to arrive, last week to start the sleeves. I was quite sure I had some 4.5mm but I couldn't find them so I ordered some new ones.

This has probably been the hardest pattern I've knit, I'm fine with lace, cables and charts but I really struggle with raglan. I attempted one before and ended up frogging it but I have persevered with this and I think I've got it now. 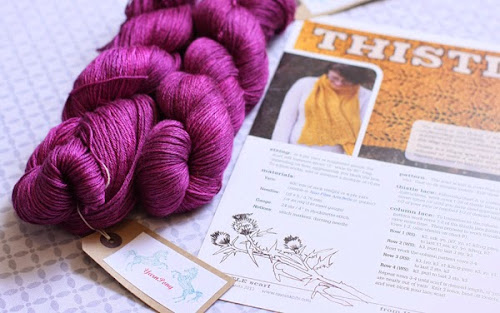 I think I must have been wearing my lucky pants this week as I've won two giveaways!!!! Tin Can Knits were hosting a Big Destash Giveaway and I won two skeins of this gorgeous Show Pony 4ply by Pony Yarns. It is a massive 874yds of yarn plus I won the Made in the UK ebook which I already had but they kindly offered to gift it to one of my Ravelry friends.

I also entered a giveaway on A Playful Day's blog, who has been having lots of giveaways and is continuing too as part of the Unwind event. I won Through the Loops Mystery Shawl Pattern by Kirsten Kapur, another mystery pattern which runs for five weeks. I'm hopefully going to cast this on, once I've finished the Gramps Cardigan.

Thank you for stopping by, have a great week.

Your sweater looks really nice. I've been wanting to knit a cable sweater.

I love that pattern for the cardigan and think yours is really cute! How fun to win those giveaways!

What a wonderful birthday present! Enjoy the fiber festival. Bring your camera and some patience depending on the crowds. Some are worse than others. Can't wait to hear all about it next month. And as always - your projects are beautiful.

Great stuff! Thanks for sharing.

Two Cables and a Frapp said...

Great post ! I wish I was confident to participate in a Mystery Knit. Perhaps one day. I love the little cardigan. So cute.

Never heard of such an event, but it sounds like something you're going to enjoy tremendously Deb! Just your cup of tea ;-) Love your boys cardigan, so cool! Ira x
Ira’s Crea Corner

I look forward to seeing how your mystery knitting goes, it must be hard to work on when you don't know what the finished item will look like! Hope that you have a great time at the yarn festival, that sounds lots of fun as well! xx

Your work is lovely!

What color is that sock yarn? I really adore it.

Beautiful! All of your projects are stunning. I really like your dpns.

I love that cabled sweater. The buttery yellow yarn you are currently working with is quite pretty. Love the purple yarn you won!

You are really on a roll: winning two give-aways AND planning to go to Unwind!

The little sweater is so cute.

Alas, I am not brave enough to try a mystery knit, even though it does sound like fun.

Beautiful knitting. I hadn't heard of unwind before, it looks interesting and Brighton is lovely. Best wishes,Pj x

Yay on celebrating your la hanau in style. Your hubbies rocks. Wowza on that deeply saturated yarn. It's beautiful. The cardigan ehihc I assume is for your grandson-bun-in-the-oven is lovely like little man cozy. I like the vintage yellow for the mystery sock-a-long.