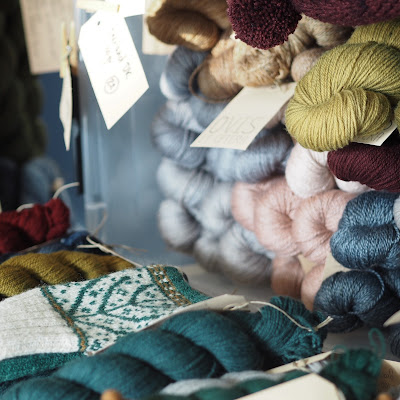 Hello there, this time last week I was travelling to Nottingham for the very first Nottingham Yarn Expo to meet my friend Dani who I don't get to see often enough so this was a real treat to spend the day with her.

I was lucky enough to win some tickets from Amy of Stranded Dyeworks who was giving away tickets on Instagram. So when we arrived and walked through the entrance gate we were immediately hit by the large, open, extremely light, airy venue which was being held at the Nottingham Conference Centre. 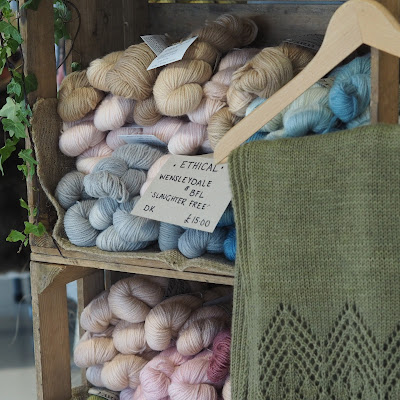 There were 100 plus exhibitors, some new to me indie dyers, some of my favourites including Moel View Yarns, Norah George and Walcott Yarns.

In the above photo, you can see the Meerdaal Scarf that I sample knit for Moel View Yarns using their stunning Ethical DK. 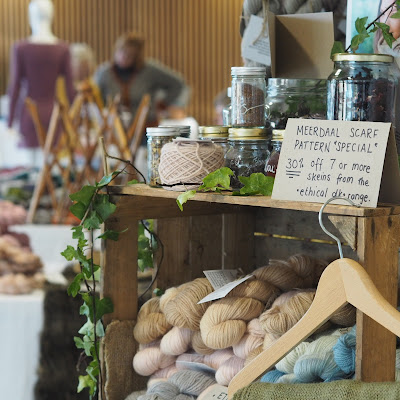 There were so many wonderful booths filled with gorgeous yarn so we decided to do a full lap of the show to get a feel and what we might purchase. The idea was that we look first then buy but as expected that didn't happen, there was far too much temptation. 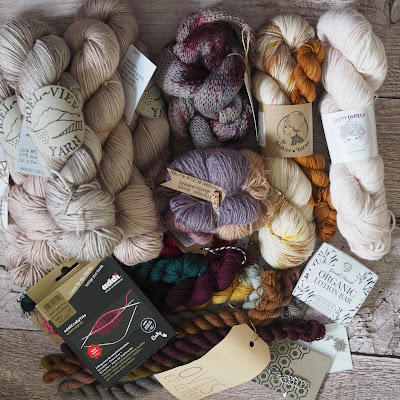 Here's my haul, I didn't go with a shopping list as such but I did want more DK as I don't have much in my stash.

Also, after trying Dani's Addi Crasy Trio's, the new small circumference knitting needles, I had to get some of those too. It's a great alternative from DPN's, you have your stitches on two needles and knit with the third so in theory, it should be much quicker than magic loop or DPN's. 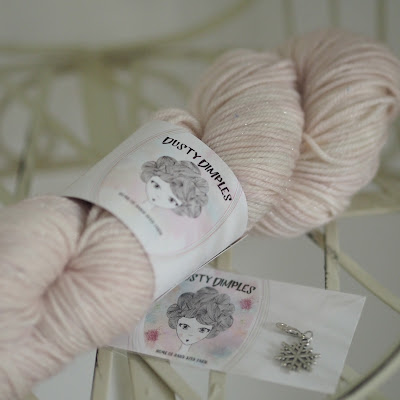 One of my first purchases was this pretty pink yarn from a new to me dyer, Dusty Dimples. The colour is Call Me Baby on her DK Sparkle base, I couldn't capture the sparkle in the photo but it is gorgeous. I'm sure this will become a hat! 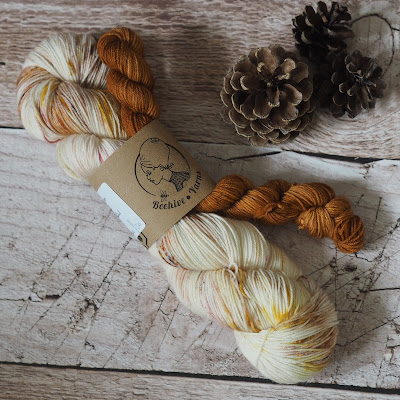 Though I said to myself that I wasn't going to buy any single skein sock yarn, I could resist this sock set from another new to me dyer, Beehive Yarns. She was such a lovely lady, so was her mom who was helping out and her booth was full of beautiful yarn and colour.

This is on her Audrey base in Hoggle and the mini is Fox Tales. Hoggle is a reference to the character from the film Labyrinth. I haven't seen this film for years so this set has made me want to watch it again. I also bought some minis to add to my collection, I got some more tonal shades from River Knit Yarn who have the most amazing wall of rainbow colours, perfect for heel and toes.

The other set of minis were from Ovis Et Cetera, naturally dyed yarn from Holland, though it was milled in England. She had the most amazing yarn and could have bought so much more but I was restrained. 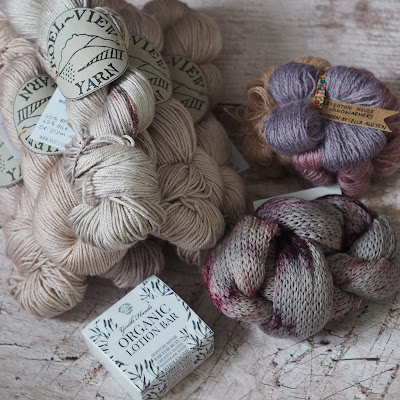 Last but not least, I went back to Moel View Yarn, I had a voucher to spend so bought some stunning DK on the BFL/Silk base, naturally dyed with Logwood. I also bought a double stranded sock blank and a yarn bundle to knit the Leighton House Handwarmers by Ella Austin, a pretty colourwork pattern.

The day went so quick but it was lovely to catch up with Dani, we both said we'd definitely go back next year if they do it again.

Have a great week and I'll be back on Thursday with the third pattern from Knitvent 2017.

It looks like you had a lovely time, and what delightful treasures!

Looks like a fun day. The scarf sample you knit is beautiful! And I love every one of your purchases.
I am excited to have joined in Knitvent, even though it will take me a year to do that much knitting!