Sock Frenzy.....lots of socks on and off the needles. 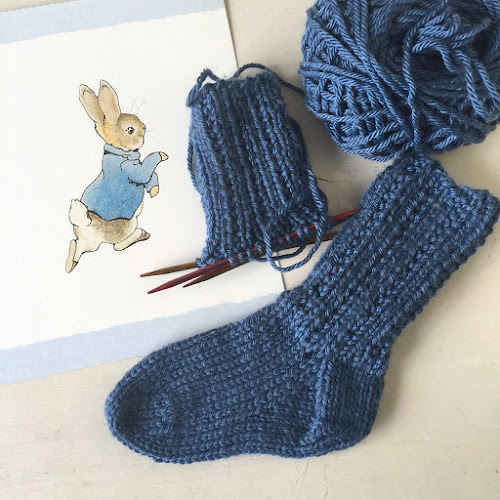 Hello my friends, where did May go!!!!!!!! I can't believe that we are already into June, this year is flying by and summer is upon us.

I don't know whether it's because of the warmer days but I seem to be having a bit of a sock frenzy going on with lots of socks on and off the needles. I tend to knit more socks through the summer months probably because I'm out and about more during the warmer weather and they are a nice, portable project to take with me. What do you enjoy knitting over the summer months?

I've knit Caiden a couple of pair of socks but neither of them have fit him properly so when the Little Squirrel socks were released from the Max and Bodhi's Wardrobe in a heavier weight yarn, I decided to cast them on for him. 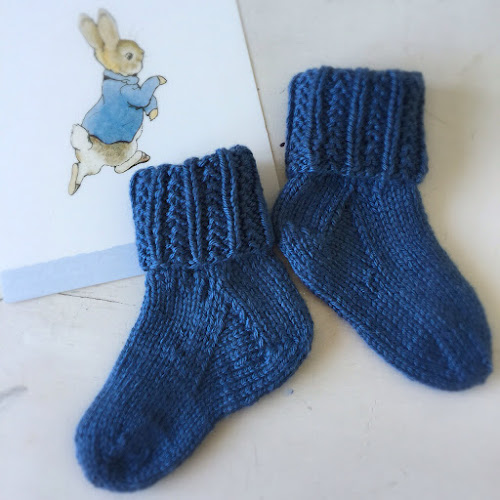 I used Rowan Cashsoft DK in the toddler size on 3mm needles rather than the suggested worsted weight, using the finer yarn, I got the baby size which fit him perfectly. 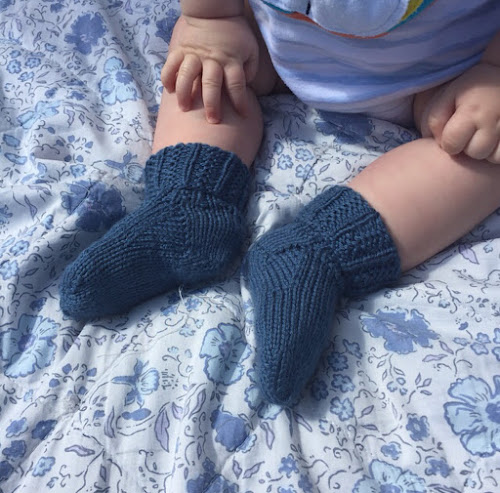 Here he is wearing them on his perfect, chubby little feet, I will definitely be knitting him another couple of pairs, they are so quick and easy to knit. This pattern would be perfect for someone who wants to have a go at knitting their first pair of socks. They are cuff down with a simple heel flap and what I forgot to mention they come in seven different sizes from newborn up to a large adult. 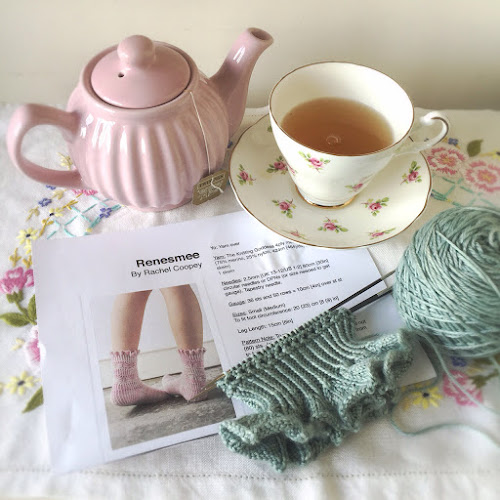 The next pair of socks are the Renesmee socks by Rachel Coopey, a pretty pair of socks with a beautiful frilled cuff. There are a LOT of stitches to start with but it is so worth it to get these gorgeous frilly socks. I'm using a very luxurious yarn for them so I'll only be wearing these in the house to keep my feet warm on the cooler evenings rather than in a pair of boots.

The yarn is Hazel Knits Entice MCN in Frost which is a gorgeous merino/cashmere/nylon blend, they feel so soft, it's a stunning yarn and fabulous to knit with.

Every year Rachel does the Summer of Socks from June to August, it's a fun KAL where you can knit any of her sock patterns and enter them for the chance to win prizes. She also releases a Mystery Sock pattern which is due out on the 1st July. 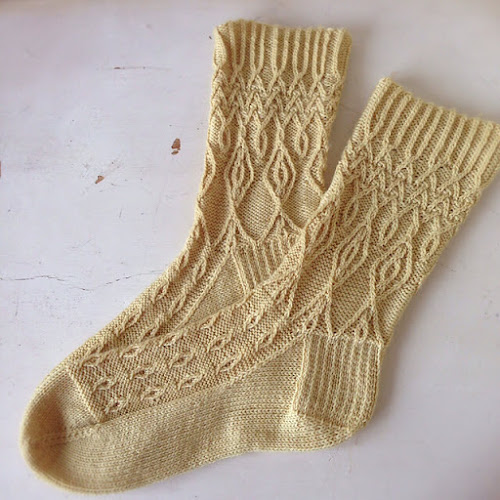 Last year she released the Pavillion Socks as the mystery pattern which was inspired by Brighton where Unwind Brighton was been held. I will be definitely joining in with this year's MKAL and can't wait to see what design she comes up with this year. 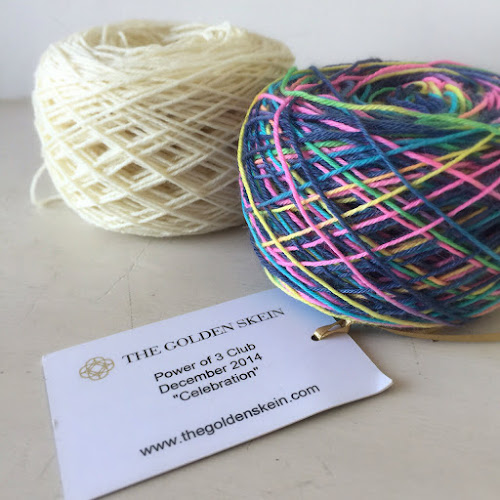 The gorgeous variegated yarn in the above photo is by Batat Hand Dyed Yarns in Hullabaloo and was part of the December's The Golden Skein, Power of Three Club. 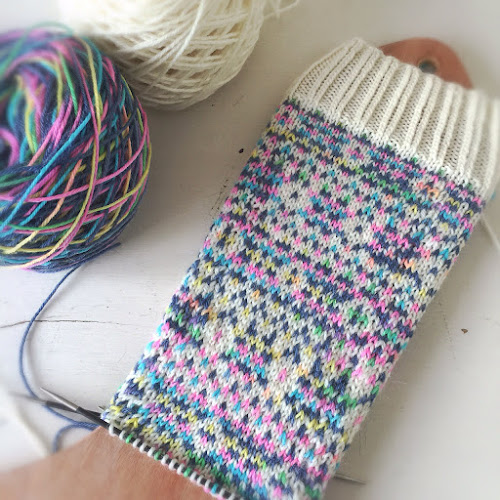 The colours are so pretty and I wanted to use it for socks but didn't want to risk the pooling. I saw a pattern by Wendy D Johnson in her Toe-Up Socks for Everybody called Fair Isle Socks. It's a faux Fair Isle pattern using a variegated and solid yarn, the variegated yarn she uses for this pattern only has a couple of colours so looks more like the traditional Fair Isle.

I knew using this highly variegated yarn wouldn't give me the same look but I knew it would break up the colours using the cream.

I really like how it's turning out, it reminds me of confetti. The Fair Isle pattern is charted and as you can see I'm knitting my usual cuff down socks and not toe-up as the pattern is written. All I do when I'm knitting a toe-up pattern is turn the chart upside down and work it from the top to bottom rather the other way round. 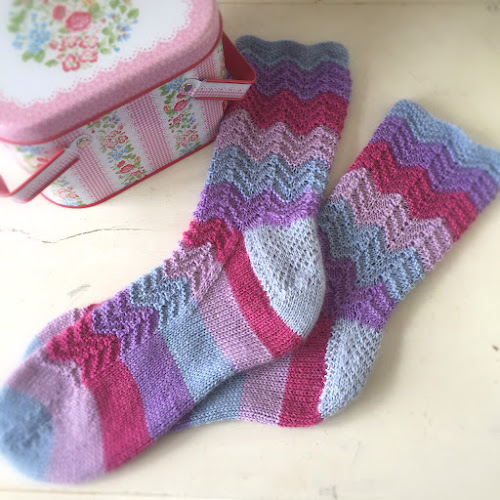 I've also started and finished my Stripes Alive socks which I don't think I've even mentioned before. This is a great pattern for self striping yarn rather than just knitting a plain Vanilla sock. I used Sirdar Heart and Soul and for the heel I used some My First Regia, just so I didn't break the stripe pattern up. I love how they turned out and will definitely use this pattern again. 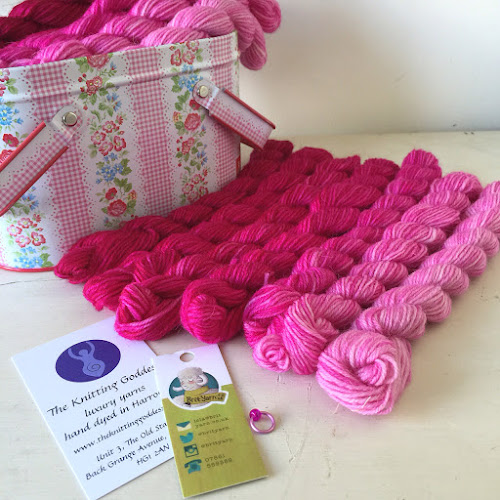 I just wanted to mention some new yarn that I've purchased from a brand new British online shop called BritYarn. Isla seeks out the Best of British yarn from a few select indie dyers and puts all of its origins from where the yarn came from to where it was dyed. I think this is such a great philosophy and I purchased these gorgeous gradient mini skeins by The Knitting Goddess which was spun in West Yorkshire and dyed in Harrogate. Also the service was second to none, I ordered my yarn on the afternoon the store opened and I received it the following day!!!!! It was beautifully wrapped with a matching stitch marker which I thought was such a personal touch. Thank you so much Isla, I can't wait to get something on my needles using this lovely yarn. 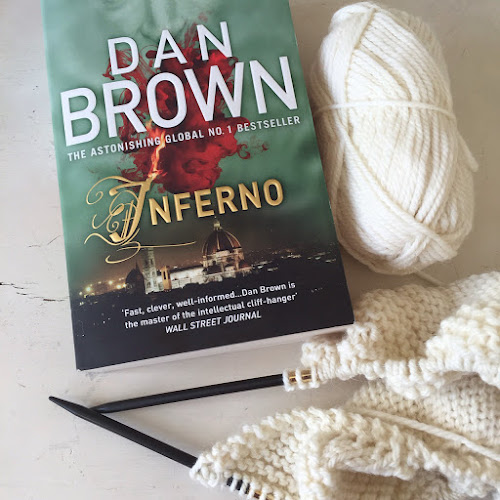 Lastly, I just wanted to show you what I'm reading at the moment, it's Inferno by Dan Brown another fast paced thriller with the great Robert Langdon. I've also started another new project which I will talk about in another post as I will be casting another one on straight away once this is finished.

I'm linking to Nicole's KCCO and Ginny's Yarn Along, have a great week and thank you for stopping by

wow so many lovely socks, you've been super busy! I love the fair isle ones, the yarns are working beautifully together

The baby socks are too sweet! The fair isle pair are really interesting. I don't like pooling either so I might give that pattern a try. I'm itching to try an argyle pair of socks. Have you ever knit those?

I have just attempted my first sock. I got to the heel and was stuck. I will be trying again but right now I just need a break from that tiny yarn and itsy bitsy needles! :)
Your socks are so cute!

Is there anything more perfect than chubby baby feet? I think not. The socks do fit just right!

I love the way you adapt toe-up. Why didn't I think of that. Such a logical way to use Wendy's awesome patterns on cuff-down.

I also knit a lot of socks in the summer because they are small and portable. Since I teach the rest of the year, I often travel in the summer and socks just work so well.

*squeals* Baby chubbs and handknit socks of love. Fantastic combination! I like how that blue's reminiscent of Peter Rabbit. Ooh! I wanna knit that Renesmee pattern. I have the whole Vampire eBook since Twilight's been out.

Your use of the variegated and cream yarn is wonderful. I am a crocheter, but I also like making smaller items in the warmer months. Recently I've been on a scarf kick. ;^)

And those perfect, chubby baby feet are adorable. And the socks are lovely, too.

All such gorgeous socks. I have yet to finish my first pair!! Love the colour you have chosen for the Renesmee Socks and Caiden's little socks are adorable! Best wishes, Paula xx