Hello, I'm back with my last tag I've made for the 12 Tags of Christmas, I've only made it to 10, these last two weeks before Christmas are just so hectic, I had to get my Christmas cards finished and I still have gifts to make . First of all though I'd like to thank the guys from City Crafter Challenge Blog for choosing my Christmas Tin as last week's winner, I was thrilled when I found out. Stella was the sponsor and I've won a fabulous stamp set, my favourite craft item !!!!
Here's my final tag, I'm not sure what I will do with them, they may go on next year's Christmas cards. 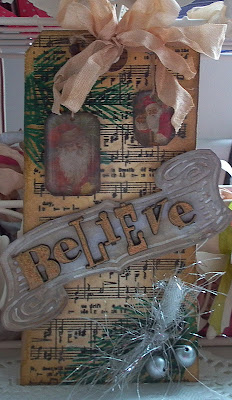 I'm going to embarrass Paige now but the other night her boyfriend Dan came around our house to see her and a couple of  hours later I was called up to have a look at her bedroom, keeping in mind they are 17 and 16 and not 7 years old, they had made  paper chains and Christmas Decorations from copier paper. I thought is was hilarious !!!! 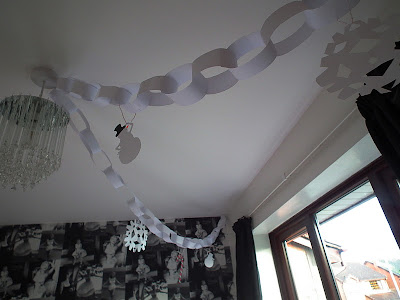 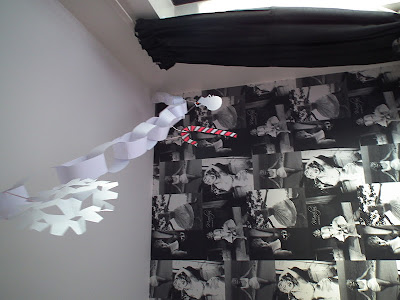 Paige made the snowflakes, Dan couldn't get the hang of the them, they kept turning out rectangular, so they were thrown out but he was very proud of his candy cane, he even made it double sided, it was very well thought out,lol. Paige also used my Tim Holtz Winter Wonderland die to cut some snowmen out, she even coloured in his nose and hat, I didn't even know she'd still got felt pens. Very inventive, don't you think, I still keep chuckling now, they were so proud of what they did,lol.

Have a great weekend !!!!
xxxxDebxxxxx
Posted by Deb Hickman at December 16, 2011

Email ThisBlogThis!Share to TwitterShare to FacebookShare to Pinterest
Labels: 12 Tags of Christmas, family

Oh what a beautiful tag my friend ... they are gorgeous ... you need to mount them all in a frame ... what a fun room ... sounds like they are two sweet youngster ...

your tag is gorgeous!! I love the ribbon details and the bells.

Isn't it great that simple pleasures can make your teenager so happy. I love it. I love your Christmas tags too. Have a great Holiday!

What a beautifull tag you made.
Happy holidays from the Netherlands.

Sweet. And tell Paige she has excellent taste in wallpaper and light fittings (my bedroom light is very, very similar)

Beautiful tag and congrats once again for the win, I hope Stella contacted you already as I haven't see your email at City Crafter.

Congrats on your win Deb! So extremely well deserved! Enjoy your new stamps! Love your last tag, it looks superb. Have a nice weekend, Ira x

Hi!!! love the tag. So wonderful..I managed to do two days of the tags.. and love your daughter's room with those photos on the wall.. very cool. she has the creative bug like her mom.. =)

Beautiful tag, I think finishing 10 is a great accomplishment!

Beautiful tag Deb! Thanks for the inspiration!

What a gorgeous tag!! You did such a great job on them..

Oh bless them. It look great.

Love your tag!! Love Tim Holtz too! I didn't make any tags but I am definately inspired to do something with a few of those techniques! Merry Christmas! :)